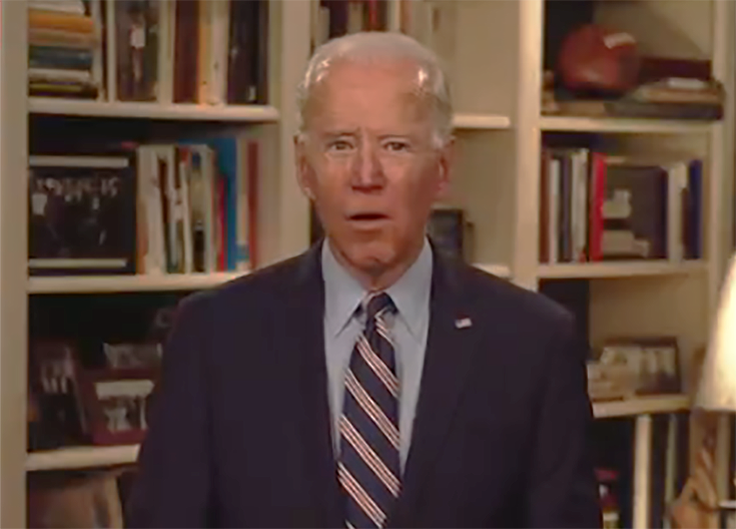 Former vice president Joe Biden delivered a live-streamed address to supporters on Monday in an effort to assuage concerns regarding his whereabouts and wellbeing during the ongoing coronavirus pandemic.

Though Biden, the presumptive Democratic nominee for president, appeared to be in relatively good health, he was unable to make it through the roughly 15-minute “proof of life” video without committing a series of gaffes, flubs, and incoherencies.

The address got off to an awkward start, as a visibly confused Biden required several reassurances from staffers that the camera was rolling before he began reading his scripted speech from a teleprompter, which at one point experienced some technical difficulties.

Biden outlined steps he believes the federal government should take to combat the China-caused pandemic, but it wasn’t always clear what the hell he was talking about. “We need to build an arsenal of democracy, as we did in 1940,” Biden said at one point. “We can take, we can make a personal productive equipment.”

The former vice president—who, as a 77-year-old man, is in the demographic most at risk of dying from the coronavirus—went on to praise a number of Republican governors, including “Gov. Charlie Parker in Massachusetts.” He was presumably referring to Republican governor Charlie Baker, not to jazz legend Charlie Parker. But maybe not. After all, one of Biden’s greatest strengths as an orator is that he always keeps his audience on its toes.

Biden offered some much-deserved praise for the Americans on the front lines of the crisis, who have continued to perform vital functions during the pandemic—health care workers, first responders, grocery store clerks, and the workers delivering packages during the crisis. “We need to be sure we never forget what they’ve done,” Biden said.

However, Biden also singled out “the journalists who keep us up to date and hold us accountable as leaders” as a group of people “putting all of it on the line for all of us.” That one may or may not have been a gaffe.

But perhaps Biden isn’t wrong. Our nation’s journalists have undergone great suffering and sacrifice during this time of crisis, as evidenced by this heart-wrenching tweet from CNN senior media reporter Oliver Darcy.

You really take for granted the office chair, and how much it helps with posture, until you’re spending hours and hours working from the dining room chair.

Share. Twitter Facebook Google+ Pinterest LinkedIn Tumblr Email
Previous ArticleWhy isn’t the media questioning China’s report that it has no new virus cases?
Next Article Democrats and Media Told us 'Turbulent Times' Was a Call with Ukraine. Now They're Trying to Rewrite the Story.