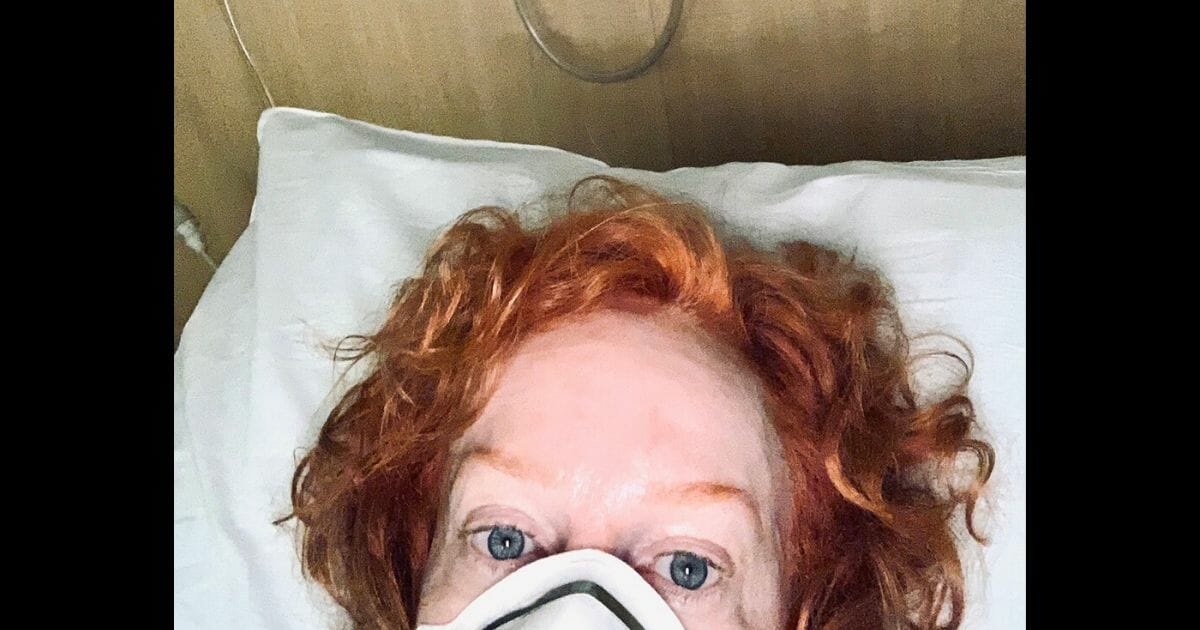 Even in the midst of the global coronavirus pandemic, leftists will not waste an opportunity to snipe at President Donald Trump.

The most recent opportunistic bottom feeder to join the fray is self-proclaimed “D-list” celebrity Kathy Griffin, who says she is currently hospitalized for possible coronavirus infection.

Responding to Trump’s tweet about the progress being made in COVID-19 testing, in whiche the president announced that “over an eight day span, the United States now does more testing than what South Korea (which has been a very successful tester) does over an eight week span. Great job!”

Griffin retweeted this with two photos, one of her hospital room and the other featuring only a portion of her masked face.

“He’s lying,” she wrote. “I was sent to the #COVID19 isolation ward room in a major hospital ER from a separate urgent care facility after showing UNBEARABLY PAINFUL symptoms.

“The hospital couldn’t test me for #coronavirus because of CDC (Pence task force) restrictions. #TESTTESTTEST”

He’s lying. I was sent to the #COVID19 isolation ward room in a major hospital ER from a separate urgent care facility after showing UNBEARABLY PAINFUL symptoms. The hospital couldn’t test me for #coronavirus because of CDC (Pence task force) restrictions. #TESTTESTTEST https://t.co/18fRiOBsdN pic.twitter.com/0sU9fHu4r0

What Griffin was referring to is the protocol to decide which patients get preference for testing based on the guidelines from the Centers for Disease Control and Prevention. Because she doesn’t fall into one of the categories that is a priority, she was allegedly denied testing.

Do you think Kathy Griffin has a right to complain about her lack of testing?

Despite her own self-importance, the cases that get priority testing over Griffin are:

Griffin falls into the next priory level, which is for “individuals who do not meet any of the above categories with symptoms,” just above “health care workers and first responders; individuals with mild symptoms in communities experiencing high COVID-19 hospitalizations,” and those with no symptoms at all.

You didn’t miss it — there is no priority for has-been comedians.

Like most medical procedures, patients are triaged based on a number of factors, such as the severity of their symptoms and pre-existing conditions, in relation to other patients who need care at that moment.

It seems Kathy Griffin assumes she deserves to cut in front of other patients.

While it’s distasteful when an entitled quasi-celebrity indignantly whines, “Don’t you know who I am?” when she can’t get a table at the hot new restaurant in town, it’s downright repugnant when a D-lister (and even that’s generous) thinks the hospital should dispense with triage protocol to cater to her.

It is unclear at this time whether Griffin is still waiting for the test as she has not released another update about her condition. The Western Journal reached out for comment but did not immediately receive a reply.

Of course, while she was suffering from what she called “unbearably painful symptoms,” she had time to once again chastise the president from her hospital bad, at least this time with only words.

Griffin notoriously posed for a photograph in 2017 in which she held a replica of Trump’s decapitated, bloody head.

She subsequently blamed the fallout from the photo for killing her career. It is possible that her shrill, unfunny comedy is what really killed her career, but that cannot be confirmed at this time.

When the photo surfaced, Trump tweeted that she “should be ashamed of herself,” and that his son Barron, who was 11 at the time, was “having a hard time with this. Sick!”

Kathy Griffin should be ashamed of herself. My children, especially my 11 year old son, Barron, are having a hard time with this. Sick!

Griffin’s criticism of her current situation is surely reputable because, as everyone knows, nothing is more reliable than anecdotal evidence from one of your sworn enemies.

Issues surrounding coronavirus testing have been a hot topic among Trump’s critics. Democratic presidential front-runner and former Vice President Joe Biden claimed that the United States turned down existing World Health Organization kits, but that claim was revealed to be false.

It should be noted that even for those who test positive, the course of treatment is the same. “No vaccine or specific treatment for COVID-19 is available; care is supportive,” the CDC’s website says.

Griffin can rail against Trump, or Vice President Mike Pence, or whoever she chooses, but the fact remains that her treatment course would be no different.

Her photos clearly show she is getting proper medical accommodations even if she has yet to be tested. While she complains from her hospital bed, she is being cared for in the greatest health care system in the world.

Putting aside Griffin’s politics and questionable talent, every coronavirus infection is unfortunate and serious, including hers.

Whether she knows it or not, therein lies the great equalizer — when any American is ill, our health care system, made robust by the free market and guided by the experts in the Trump administration, will do everything possible to make her well.

Unlike what’s happened to her career, we wish Griffin a speedy and full recovery.

We are committed to truth and accuracy in all of our journalism. Read our editorial standards.